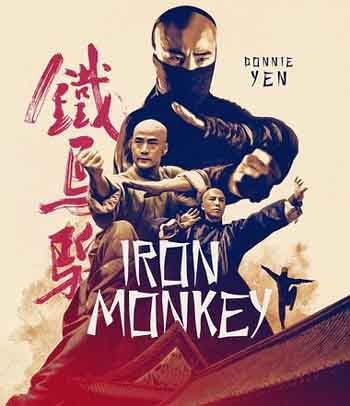 I’m not usually a fan of ’90s-era Hong Kong action cinema, which is inevitably over-reliant on wirework and over the top style, but I can make an exception for IRON MONKEY, which is in itself an exceptional film. It’s a retelling of the Wong Fei Hung story with a twist: this time around, Fei Hung is a child who plays a supporting role to the central thrust of the storyline which is about a Robin Hood-style freedom fighter battling corrupt politicians.

The great thing about IRON MONKEY is the action, of which there is plenty. It’s ably directed by Yuen Woo Ping and, put simply, it kicks ass – despite the plentiful wirework. Donnie Yen is a past master at this kind of material and delivers an action-oriented performance that never lets you down, while the real surprise is Rongguang Yu, a very familiar face in Hong Kong cinema who proves his worth in the kung fu stakes.

The narrative is fast-paced and fuelled with conflict and action and the whole film has a colourful, old-fashioned vibe that keeps it moving merrily along. There’s humour in spades, some truly devious villains, a decent script and quality performances. But it always comes back to the action, and for once IRON MONKEY deserves the hype. It’s a keeper.