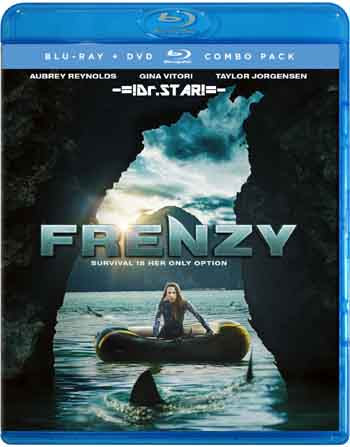 Story… In the aftermath of a plane crash, a woman fights to survive a pack of killer sharks.

Have made no secret in the past of intensely disliking, and even outright hating a lot, a vast majority of SyFy’s (near-universally maligned for good reason) output, though there is curiosity as to whether they are capable of making something good and compulsive about their output’s badness. Admittedly, SyFy do have a small group of watchable films and the occasional (big emphasis on that word) above average one, unfortunately outweighed by the lacklustre at best and often dreadful films they churn out.

Am well aware, just to make things clear right now, that films like ‘Frenzy’ are not ones to be taken seriously, have been well versed enough seeing previous SyFy efforts to not expect that. Have seen my fair share of low-budget shark films, and any other kind of low-budget creature film, and will admit to finding some guilty fun in some of them (i.e. the first two ‘Sharknado’ films). There are definitely worse shark films than ‘Frenzy’, which for a SyFy shark film is borderline tolerable if still not good at all.